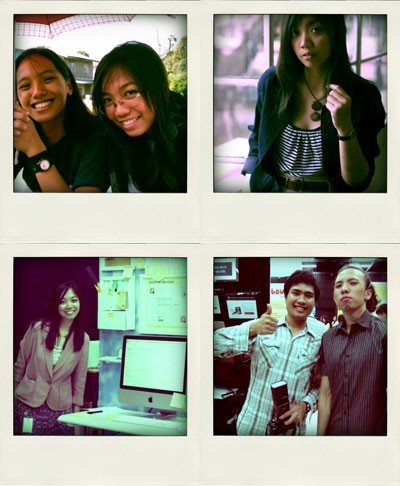 I guess I consider this my public timeline for 2011 with the memories that I could be more fond of. 2011: I have mixed feelings towards you. You have been a year of regrets, realizations, mistakes, anger, hate, and disappointments. I could have done without you.

But there had been opportunities, moments of hope, newfound appreciation, graduation, a bit of traveling, a lot of dating, love, learning, and risks.

Although I’d really want to forget so many things about this year that’s about to end, I have to accept that it will remain to be unforgettable. I don’t think can stop asking questions so soon. I’ll never have answers but those questions will always be there, and I leave it to Time to do its work. Meanwhile, I could highlight those rare, better moments that make up for the worst memories.

It started as a highly stressful and depressing year, but immersion and thesis helped me pull through. :) I will always remember how Parker was amazed at how much our batch enjoyed putting up our Thesis Exhibit, and how sad we were that it ended (in February).

February 2011: the calm after some storms

Tangled — finally a good Disney movie that I actually enjoyed after a while. I was there when C bought his iPod Touch…that he lost a few months later.

Thesis exhibit was over. Defense went very well (February 12!) for me and we celebrated at Yellow Cab in Eastwood.

I will always miss having Thesis with everyone in my block (and batch). :)

Valentine’s Day: I still feel horrified over the fact that I baked and gave my thesis advisor some cookies without knowing he was diabetic (THE GUILT!). And I will never forget how my Best Guy Friends made me feel like a special girl by giving me roses. <3 Seriously, guy friends can’t get any better than that! (Surprised me with a song, hiding them roses behind their backs. I FELT SO SPECIAL! MY FIRST BOUQUET EVER and that will always have a place in my heart. Very much reminded me that I got friends who will always have my back despite everything.)

Got into an accident with a truck on the way home. Had to wait with my brother at the police station for our parents. My brother filled out forms and stuff, since he was the one driving, and I took vanity pictures because…there was a mirror the size of a wall.

Goodbye school. Did production design for the very last time. Squeezed inside a hot tub in Laguna with seven other friends (and some dancing and singing with the karaoke). My cousin’s wedding, which was really cold and lovely.

Boracay with Jamie (and her family) and Mary! Ice skating on C’s birthday (had more chances to skate on ice than C before that, but he was still better than me!). C’s birthday overnight at Tagaytay with the Rocks and other friends. Started to make the TARDIS bag, which I eventually more than 6 months later.

Started the month with a trip to Cebu with Gail, to visit Ruby. Not a very exciting month. Had a lot of rest. One of the last few times I was able to see my blockmates before everyone started working (or studying again). Comic Con happened and C and I dressed up as the Doctor and Amy Pond (SM Megamall also flooded!).

Bangkok with my mom, aunt, and cousin. I love Bangkok and I miss it already. I had a lot of dates: with C, with Gail, with Lles, with blockmates, and with other friends.

Temasek Foundation Community Dinner at the Shangri-La Hotel. I missed all the Singaporeans!

I started my job and it’s one of the good decisions I’ve made this year. :) I’m lucky enough to have a job (that I enjoy) and still be only a block or two streets away from C’s office.

Singaporean friends also came to the Philippines so I was able to catch up with them over dinner. I wish I had more time to show them around, unfortunately being new at a job means I can’t take that many leaves yet.

I’ve been meeting so many new people this year, like Monica (Peter’s friend), who’s such a lovely and pretty singer. Martin is also one of the new friends I made this year (but because he is C’s friend). Being new at work, I didn’t know many of them the first month, but everyone was friendly and really nice to me. :)

September 2011: a month of many things

C went to Japan so I got a lot of pasalubong when he returned home.

WATCHED IN THE HEIGHTS WITH Peter, C, Angelica, and Cholo. Starstruck moment in the elevator! I haven’t really been watching plays since Sophomore year of college so I really enjoyed watching In The Heights. It was such a good performance too!

Finally finished the TARDIS bag so I was able to give it to C.

There was also a black-out (because of the storm, I think), and C stayed over for a while after bringing me home. He ended up jamming with my brother in the dark. :)

Things have settled into place: my job, lunch dates, new friends. Ruby also came back from Cebu for a short visit during her sem break, and we experienced a dinner at Midnight Mercato for the first time! :) Played Monopoly (cards) for the first time with Cholo, Angelica, and Zacky (like a halloween celebration).

Epic halloween at the office was EPIC.

An almost month. A bit of setback emotionally, but it was also a month of trying to go out of my comfort zone. I attended the IMMAP Mic Night alone, met a lot of new people, handed out homemade business cards, and socialized a little. Almost got out of my shy little shell, but not quite.

I’ll never forget getting invited to C’s brother’s birthday, having fun there, and meeting his friends :) Also an almost nice memory, save for the fact that I lost my mom’s necklace that night too.

I’m really lucky to have C who made the end of 2011 more sweet than bitter. Celebrating my birthday then Christmas with him and having a fun trip with him has made me feel thankful, in spite of all that happened this year. :) That I’m glad I said “yes” when he asked me out anyway. That I’m glad I still followed my heart but still kept to my principles and was as honest as I could be. That yes, he does make me happy and never fails to inspire me to become better than who I am right now even though he’d always say I’m already “perfect” the way I am.