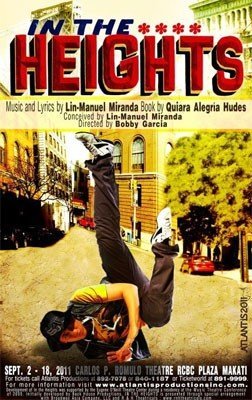 I watched In the Heights (Manila, by Atlantis Productions) last night with C and a couple of friends. The play’s about these characters living in Washington Heights — immigrants mostly, who are in a poor community but struggles to get by and dreams of moving upward.

C has made me listen to the music from the original musical before, so when Angelica said Atlantis is going to make a local production of the Award-Winning musical, C (and Peter) got super excited. Naturally,  I wanted to watch too (the ticket was just Php1.7k). We even kinda dressed up for the night!

I really enjoyed watching it. I don’t usually watch musicals, but it doesn’t mean I don’t love them (in the past I only had friends who got into the musicals-turned-movies so that’s what we used to sing, unlike how C and Peter are more into musical productions and are also dying to watch The Book of Mormon). Last night still reminded me of Sophomore year in college, when I used to watch a lot of various plays with my blockmates for Filipino class. Which was how we watched Orfino at Zafira in UP. I’m just grateful for having friends who heard about In the Heights and wanted to watch it that I was able to go with them too.

One of the awesome things about last night is the fact that there were a couple of Ateneans singing and dancing as part of the cast. Such as Scott Pilgrim-Santos (Bibo Reyes) from the 2011 Orsem Film Scott Pilgrim-Santos Versus the World as Sonny. And people I used to just see around school — Delphine Buencamino and Regina Claravall. I’m glad they’re able to do musical productions professionally after graduation since it seems like it’s something they probably love doing, and I hope they get to perform in more shows in the future!

Although not all of them performed exemplary, everyone was at least very good. Some of them just really stood out, such as Nyoy Volante for both his acting and singing (I haven’t had the chance to watch him perform or listen to him much in the past but last night proved to me that I heard what I heard about him for a reason0n) and Felix Rivera who, for the first half of the place, I couldn’t figure out why his face looked so familiar until someone mentioned “Zefira” and I remembered thinking he was cute too, back then, haha (and with whom we had this surreal elevator-encounter after the show. Expounding on it below). Calven Millado / Kevin was a bit weak in his acting, I think.

And what is Piragua, really?

So we kinda dressed up a bit for the show. I wanted to take advantage of the perfect chance for me to wear my lace-y dress I got from Bangkok, which is too short for work but great for going out. C looked great in his white long-sleeved polo and gray pants and jacket. Cholo wore his coat and Angelica paired her striped top with a matching belt while rocking some heels, while Peter had his raccoon hat!

So when we we got into the elevator to go to the basement parking, Peter noticed Felix was walking towards the elevators too so he kept the elevator open, and Felix got in. Enter awkward moment when C goes, “hey man, congrats,” and I forgot what Felix said in return but in the middle of the 4th floor and the 5th basement, I took this picture inside the elevator. Even tried to frame it carefully because there were other people inside, so it wasn’t exactly the easiest place to take a photo. But there we went! After the post-awkward-moment of photo-taking, Felix gave Peter a flyer for Next to Normal, and he said it’s worth watching.

I was too tired on the ride home and slept almost as soon as I got dropped off. Yesterday was another one of those perfect Saturdays wherein I spent most of my time with C and some friends. :)