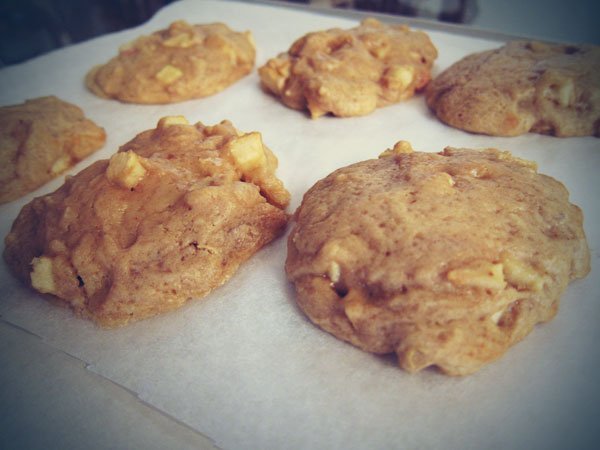 I baked apple “cookies” this morning using this recipe, but without cloves, nutmeg, walnuts, and dates. Basically, just apples. Like the reviews on the site said, it turned out cake-like and was actually more like apple pie. But shaped as discs. So it’s a Ninja Apple Pie, because it’s disguised as a very soft “cookie.” (Actually, I wonder if I didn’t add milk it would harden into a cookie? I added 1/4 cup as the recipe said, but maybe I can do this again but without milk next time.)

I had a second interview this evening, so I dropped by C’s office in the afternoon first and brought the apple-pie-cookies (which, C dubbed as “pookies”). There were two sets, one with medium-sized circles and another with giant circles. I told him one set was for him, and then another was for his to share. But he shared both of them anyway. His sister said they were delicious, and I think the people at his office enjoyed them too (I would like to believe that his boss found them delicious as well, and didn’t eat a couple only just because he usually ate a lot). So at least I didn’t visit their office as a hindrance — I came bearing a gift of offering. :P It was just too bad C just started to get busy during the time that I was there.

My second interview was…okay. Just more intimidating that the first one. But I hope I still pass it anyway. If not, I know exactly what I need to work on. :P Will get the results by this week. Crossing my fingers!