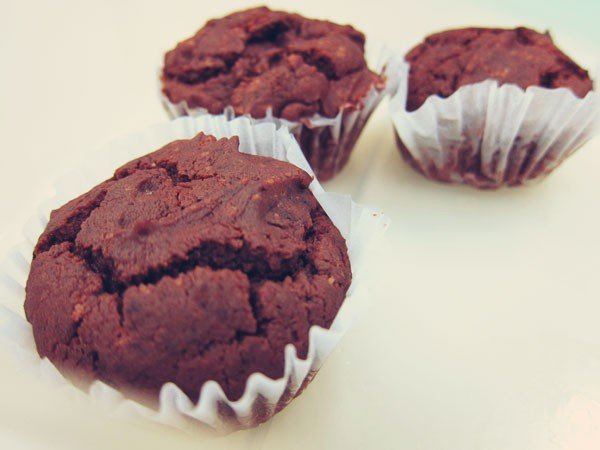 I tried to bake Ferrero Rocher cupcakes last week but only got the cupcakes part right. No gauche, and a horrible mess of an icing. It was so horrible, I can’t even describe how wrong it turned out to be (not the taste, it just refused to turn into icing because I think I used a wrong substitute for heavy cream). I think Life is telling me, “You can’t have everything!!!”

The icing (that I messed up) was 80% Nutella. A whole Php300+ bottle’s worth of Nutella and I just couldn’t bear to throw everything away. Adding more sugar and a bit of everything couldn’t fix it. I ended up trying to salvage the whole…alien mess by trying to bake it instead.

I don’t have a photo of the first batch, but after adding more flour, some salt, baking powder, baking soda, and some sugar (which I really shouldn’t have done anymore) they came out as powdery sugar cookies. Sort of like icing cookies, but a bit more flaky (due to the sugar) but it melts when you bite into it. At least they puffed up into something that looks like a cookie instead of —

I tried putting eggs in the second batch to see if it would make the batter less…sugar-powdery and thicker after baking.

This time the cookies didn’t puff up, so technically they’re not even cookies anymore. They’re a totally new dessert that probably tastes more awesome when you top it with ice cream and then eat them together. At least I know I ended up using too much egg. They don’t taste bad. They’re not just that visually appealing like real cookies.

C was first to try the cupcakes (they were at least edible, even without the icing, but I shouldn’t have put that much almond flavoring. Anj, C’s sister, also suggested I use real almonds instead.) and while I know they’re bad, he said they’re not so bad. I’ve just baked better. Which was true. The mocha cupcake with chocolate buttercream frosting I’ve baked before tasted way, way better. Maybe the cupcakes would have tasted better if I did the nutella icing right, but no, life doesn’t always go the way you want it to.

And then the Red Velvet

So the other night while we were on the way home from his shoot last Saturday, I asked C if he wanted anything for Monday. He was so exhausted by the shoot, I felt so bad for being able to nap while he was shooting. :( C never requested anything specific from me before that when he said he wanted the “cupcakes I baked before, that I was really good at making,” which I knew he meant the red velvet ones, I just had to bake them. C’s going to Japan on Tuesday so Monday would be the last day we’d get to hang out before he’s gone for a week.

So I found myself baking at 10pm in the evening on a Sunday. I ended up baking really late because I waited for my parents to come home from grocery shopping, and I asked them to buy cream cheese and butter. Plus, it’s better that I could leave the cupcakes and icing separate overnight, and then put the icing on the cupcakes the next morning.

I tried half a cupcake after baking (just the red velvet) and, oh man, red velvets are still the best. I now have a mixer, too, so I was able to fluff the icing the way I never got to before. I’m honestly not saying this because I baked the cupcakes but I really, really like how red velvets come out after I bake them.

I’m giving a bunch to C when we have lunch together, and I hope they taste as good as he remembers. :)