The Singapore Art Museum (SAM) is the only place where you can get Ambeth Ocampo and buko pie at the same time. As sir Ambeth’s former student (I took Philippine/Rizal history under him last semester), I had been anticipating Ambeth Ocampo’s talk on Jose Rizal (and no, I didn’t realize they’ll be serving food–which eventually became my dinner–until the end of the lecture). I enjoyed his class, absorbed all his stories, and thrived in his humor. His lecture was familiar and yet even as I was listening to his anecdotes the second time, I still laughed at all of them. Ambeth is a professor I would not hesitate to take twice (given it’s a different subject I’m taking, not because I failed the first one). I’m lucky since apparently now sophomores take history in blocks instead of choosing their professors. I AM PROUD TO HAVE TAKEN HISTORY UNDER SIR AMBETH OCAMPO. He’s officially part of my favorite-teachers list. :D

Noel Cabangon also sang one song before the talk. There’s something that was just completely touching when I listen to him sing. He really is an artist who can move people.

In front of the museum, there’s this piece of art called “Flirting Point,” which has many interpretations for different people (well, like any other piece of art I suppose).

I sat under it but unfortunately no flirting happened. :P

I’m starting to get used to getting lost since it seems like it will be a common factor in most of my trips to places I’ll be visiting for the first time. And I’m starting to like walking. My feet are even getting used to it. I’ve had some blisters last week but I’d have adapted to all this walking in no time!

Yesterday early-afternoon I went to the Asian Civilizations Museum (ACM) to catch the 2pm English tour (I’m still an art student, ok! So I was genuinely interested and I’ve been looking forward to visiting ever since! I left early when I first dropped by two days ago because I missed the English tour). AND I DISCOVERED THE MOST AMAZING THING. STUDENTS CAN GO INSIDE FOR FREE. It originally would cost me five bucks so the word ‘FREE’ just sent my heart into a flutter.

I went there alone because other people had things to do or classes to attend and I didn’t know many who are interested in museums. But it was okay because I could go in my own pace. I know I’m going to go back to the museum a lot of times. I JUST KNOW IT. One day wasn’t enough. I wasn’t even able to explore the whole building yet–all the exhibits and galleries–so that just proves how often I’ll be going back here. And it’s just perfect because I’m taking a visual arts class (unless it does come in conflict with another subject) and our topic next week would be Buddha (I think). It’s easy going there: from PGP, I took the bus to Buona Vista, hopped on the MRT there, and then went down Raffles Station, took Exit H, and then just crossed the bridge and VIOLA.

I was able to go around the area more this time. It was so cloudy I was afraid the rain would start pouring. I ended up getting chased under my umbrella by a little drizzle by the end of the afternoon but I was lucky it didn’t really rain hard. The pictures aren’t at their best though.

END_OF_DOCUMENT_TOKEN_TO_BE_REPLACED

Yesterday, following Advertising Strategies class, Tata and I went to the FASS Canteen and lo and behold! It was even cheaper than dorm food. We bought from this stall a meal that cost $2.30 but had servings for 2 people.

And although yesterday was the ultimate adventure fail (it started to rain hard when we were on our way to this roadside flea market that we ended up not finding it), this afternoon was rather nice. I met up with my mom’s office-mate to get my happy-package from him so I went to the Asian Civilizations Museum at around lunch time (took the MRT and came down at Raffles Station, from which the ACM was easier to find). I didn’t know I’d end up at the riverside, which was, apparently, also near Clarke Quay.

END_OF_DOCUMENT_TOKEN_TO_BE_REPLACED

and there are many sheep here in Singapore! Not real sheep but it’s so hard to resist spending money when it concerns these cute, fluffy creatures that I never got over.

I just had to inflict a premature state of poverty buy buying that pillow. There was a cute top I wanted to buy but it cost $13 and I wanted to save so I didn’t buy it BUT WHEN I SAW THIS, ALL RATIONALITY I JUST THREW OUT THE WINDOW.

This was last Sunday, when we went to Golden Village to watch Sherlock Holmes (which was just awesome, btw. I want my own copy of that movie. I really loved the editing because they used jump-cuts, I think, in a way that doesn’t throw the viewer off. PLUS. HELLO. ROBERT DOWNEY JR. AND JUDE LAW. The women in the movie didn’t have lines that could have gone on par with Downey and Law, which made their characters less interesting, unfortunately.). I splurged on the sheep pillow (IT TRANSFORMS FROM THAT PICTURE I TOOK), a couple of postcards and a small pencil case (because it is always $2 at DAISO, I ended up…buying).

My cousin also treated me to mango sago! Their mango doesn’t taste like Philippine mangoes (which is still the best!). I thought it tasted like peach, haha.

There were many useless things I wanted to buy like this:

but it was ridiculously expensive and I had a student budget. SHEEP PILLOW WON, HANDS-DOWN.

END_OF_DOCUMENT_TOKEN_TO_BE_REPLACED

Going around places on the second day made me realize how much I wanted to buy and how little I actually had for spending. Now, I’m always thinking of money-money when I buy things (converting them into pesos just to know if it’s expensive or not). My biggest cut-off is on food because really, compared to Manila, food here is expensive. You don’t have drinks that go with them so you’re really just paying for the food itself for the price of twice a regular Manila meal. :( In short, nothing is cheap in Singapore. NOTHING.

My second day started with an affordable brunch and ended with dinner I shared with Tata so we could half it. I was itching to do some accounting because I didn’t have time earlier during the day. As soon as we got back from the hotel that morning, I took a bath (WE GOT LOST/MISSED A STOP SO WE HAD TO WALK A LOT A LOT A LOT SO I REALLY NEEDED THAT BATH) and fixed/cleaned my room. Then we were off to explore a bit of NUS (now we know where the buses at PGP are) for the orientation and registration the next day. After which we went to Orchard Road to get all my dollars converted.

Then we looked for things for Tata. It was a nice (expensive) department store but it had so many cute things. I wanted to buy this toothbrush holder they sold at the kid’s section but I wasn’t going to spend bloody 8S$ for one when I have other more important things to worry about. BUT THERE WAS A PANDA ONE AND I WANTED TO HAVE IT. I wanted to buy a pencil case too because I don’t have one but I’ll go pencil-case-less for a while before I even think about it (THERE WAS THIS SHEEP DESIGN AT KINOKUNIYA BUT DAMN MONIES!). I wanted stickers too. :(

And then another train ride going home. Where we walked a lot again because we had to find out how to get to the bus stop on the other side of the highway so we looked for the pedestrian lane (on the way we discovered that the shops below the Buona Vista Station are cheaper so we can afford a couple of things there). Everything involved a lot of walking and walking and moving from one station to another to get to different rails that by the end of the day I was just plain exhausted.

Before sleeping, I set up an excel file for account (WHICH I’M REALLY PROUD OF BECAUSE I’M NOT EXCEL SAVVY). And then I was too exhausted to do much else.

If there’s one thing about me, it’s the fact that until January 4, 2010, I’ve never rode on an air plane before. January 5th was the first time ever and it’s a mixed experience because (a) I did not get any sleep at all–I was up until 3.30am, (b) although I didn’t know what to do inside the airport, I managed, (c) the flight was mostly smooth until a point where we were about to land and my ears just started to hurt like hell, (d) that due to that I was kinda deaf. It was only at the end of the day that my ears started working fine.

Nevertheless, I was on the same ride with Danica (my Philo classmate). Luckily, I got a window seat for my first flight ever! So it was easy to take pictures of pretty clouds. Our plane was a PAL Junior because it was smaller compared to the others. For breakfast, I had a choice between tapa and seafood dumplings so of course I chose seafood dumplings (DUMPLINGS!!). They served it with noodles and Kopi Rotti. Weird combination but ohwells. 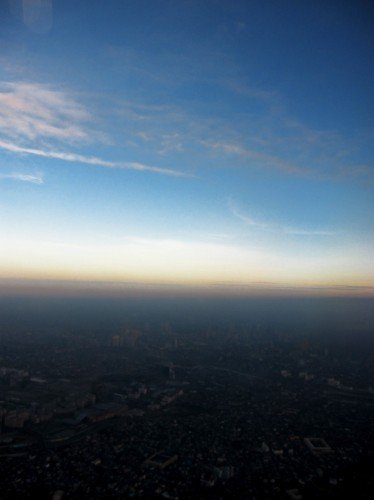