voila, the rest of your life you’re green 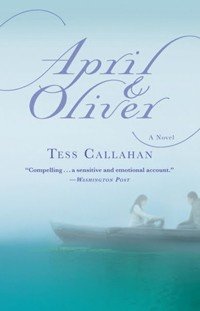 I bought this on impulse and almost didn’t sleep last night just to finish it. The story is not extraordinary. A romance you’ve read before: childhood friends who grew up together and then drifted apart, only to be brought together by a tragedy with a lot of issues, secrets, and years of sexual tension in between them. Despite the predictability of a part of the story, I still very much enjoyed reading April & Oliver.

I think few people would understand the wrong choices April’s made in life (and had continued making, even with the presence of “family” who’d try to give good advice). But sometimes humans have this tendency to walk the path towards self-destruction without fully being conscious of what they’ve been doing. Words of encouragement or support from close friends or family could fall on deaf ears because inner demons cannot be extinguished by anyone but yourself. And it’s taking April, who’s been running away from a horrible adolescence by trying to forget things that happened, a really long time to conquer her own demons. I’m not even close to the kind of damaging events that happened in her life, but I could understand that self-destructive downward spiral. It happens to each of us, sometimes.

“People think a soul mate is your perfect fit, and that’s what everyone wants. But a true soul mate is a mirror, the person who shows you everything that is holding you back, the person who brings you to your own attention so you can change your life.” – Elizabeth Gilbert

If April and Oliver were “soul mates” then the quote above would have been the perfect description of what they do to each other. Oliver forces April to face her past and April symbolizes passions that Oliver fears. Personally, I think it was necessary for both of them to see each other again after all those years to help each other move on from a shared and yet individual past. I like how the book ended in an unexpected note that left these two characters on an avenue for growth or hope.

[SPOILERS] A development that would have to be left in the imagination of the readers. I’m glad that the story ended with what seemed to be a question of wether or not they’d find each other again, if they’d eventually end up together at all. Because they had to find themselves first (make themselves whole and complete on their own) before anything between them could happen. Broken people who get together at the lowest points of their lives more often than not start a relationship based on the wrong reasons, so I’m glad that this didn’t happen to April and Oliver.

One of the things I loved about this book is April and Al’s intimate yet platonic relationship. They’re two people who can feel very comfortable with each other but with the absence of sexual tension. They seem to be always enjoying each other’s company but in a more platonic and relaxing way. As if no matter how other people might get the wrong idea, even the reader knows what they have is a strong relationship founded on ‘family’ and time. It’s refreshing because, I guess, I’m tired of everyone assuming male/female relationships always mean something. Maybe I just want a comfortable relationship with a guy-friend, much like April and Al’s. Emphasize friend. Where it’s so easy to have fun in each other’s company and that’s it. No complications, unlike April and Oliver’s relationship with each other. Though, of course, that’s a different context altogether.

Anyway, I loved Tess Callahan’s novel and I’ll be re-reading this book sometime in the future. :)