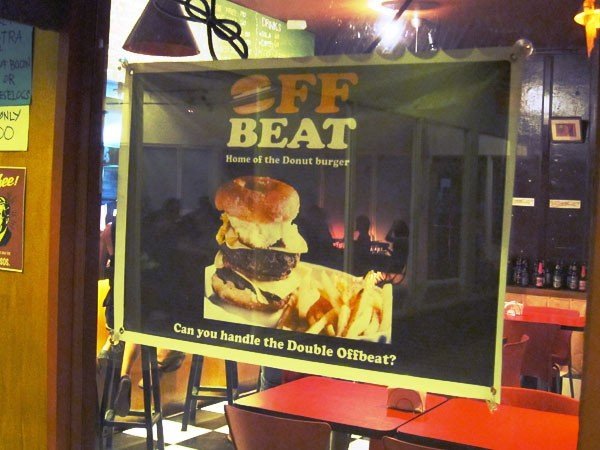 C and I dropped by Fully Booked at High Street for a book launch of a project which Kasey and Create.PH worked on. We were all hungry so we decided to grab a quick dinner and C wanted to go to Krispy Creme because, he said, they sell donut burgers now. He just saw one on Facebook. I wasn’t really keen on having donuts for dinner, so I was grateful they have this sausage and cheese baked bread. There weren’t any donut burgers though.

So in the car, I was asking him if he’s sure the picture he saw was an ad. I was even making fun of him, saying he’s gullible thinking just because there’s a photo there it’s an official ad already. Since there was no logo or copy on the picture. He showed me the photo on Facebook, and how the description said the donuts were from Krispy Kreme so he just assumed it was official.

After that quick dinner, we dropped by the Collective for a post-prod company’s Christmas party and lo and behold…

It’s so freaky-funny how all this happened in one night (looking for the donut burger, arguing at the existence of it, then finally Off Beat proving us that it exists).