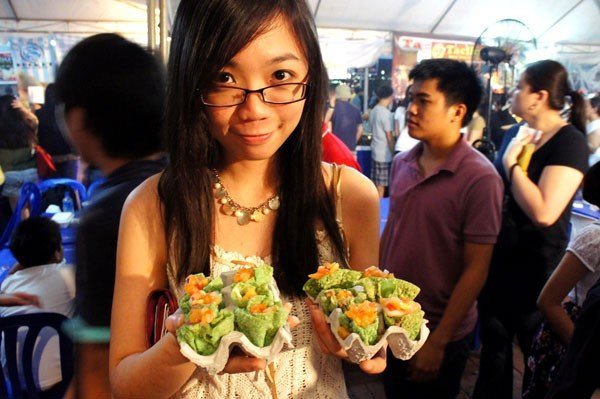 Don’t get me wrong. I don’t mind pigging out, but 10PM – 12MN is really not the healthiest time to go for a food-trip, unless, well, you have the metabolism of a hyperactive 10-year-old (or if you exercise regularly). Which I just obviously don’t. So I just try to watch what I eat (and how much I eat) when possible. Eating a lot so late at night is one of the biggest No’s for me.

But Gail and Ruby seemed to really look forward to trying out Midnight Mercato at the Bonifacio High Street area so I didn’t have it in me to suggest otherwise. Good thing I found those bite-sized tacos, which were creatively served in cardboard egg cases. I like tacos, and it’s Php60 for 1 box, and Php 100 for 2 boxes so I just got the set of two for us. I found some milk tea (average, not that great, but it was alright) while Gail bought a serving of white chocolate truffle cheesecake (for Php130, I think). THAT was good, too. I had a few bites before I felt like my stomach was going to throw up everything I ate.

Despite the good food though, I’m definitely not eager to have dinner at Mercato anymore. Breakfast and lunch, yes, but dinner at 10PM is still the worst time to fill your stomach with food. I wonder why they don’t just have it at around 7PM? :'(